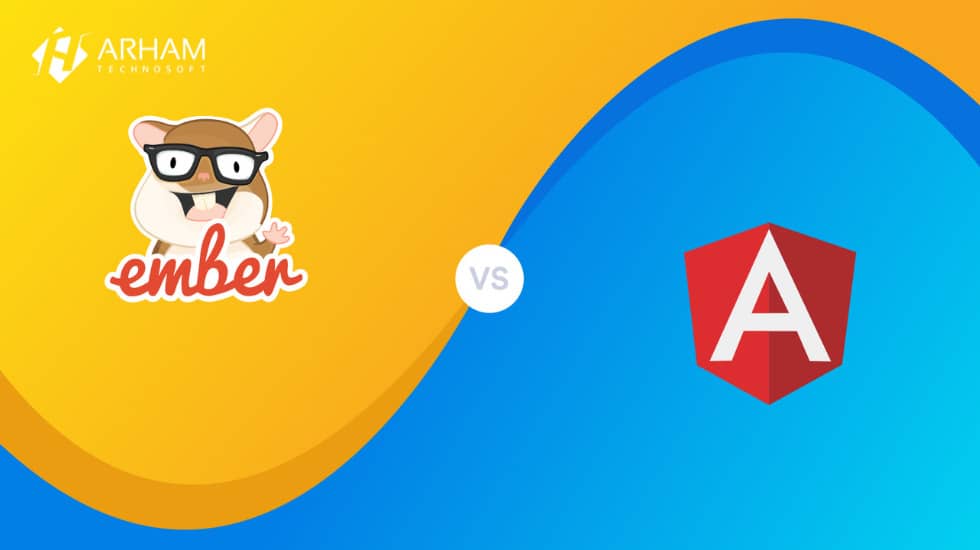 If you are interested in Single Page Web Applications, this article is for you. Application developers are exploiting more and more new possibilities and technologies, and in particular, Javascript is one of the most popular languages ​​for everyone.

Moreover, one of the reasons why web application developers love working with JavaScript is the existence of advanced JS-based SPA development frameworks, including Ember and AngularJS, for the front-end.

The ultimate goal is to develop robust, high-performance, and highly scalable single-page applications with a feature-rich user interface that can attract and retain potential customers. These frameworks have extensive libraries and tools that eliminate the need to rewrite codes, have clear documentation, and have a supportive developer community.

This article introduces the similarities and differences between the two front-end SPA development frameworks, Ember.js and AngularJS.

Ember.js vs AngularJS: what’s the difference?

What are the advantages of Ember vs Angular?

Which framework to choose?

EmberJS vs AngularJS: what’s the difference?

Ember.js is an MVC (Model-View-Controller) JavaScript framework to develop client-side web applications. Over time, Ember.js has shown how well its team can maintain the framework and incorporate updated standards. Some programmers contribute the most to Ember development and must deal with JavaScript standardization.

What is Ember.js used for?

Ember has a component architecture suitable for developing complex web applications. Ember being a strictly organized JS framework, you will only be able to follow a specific flow while working with it.

Developers can only perform the functionality prescribed by the framework architecture. Ember.js provides an advanced control system for its platforms. It has several integration tools with new releases and step-by-step instructions to avoid outdated APIs.

The main advantage of this framework is to favour convention over configuration. Developers do not have to provide detailed data.

Ember favours respecting naming conventions and creates the final code automatically. It also sets aside instances where it could not follow convention. Thus, it can be argued that Ember is more suitable for large-scale application development.

Its modelling engine creates a fully-fledged modelling mechanism with the Mustache engine at the heart of it. It minimizes the total amount of code to write. The system relies solely on text manipulation and does not know the DOM. Thus, it constructs the HTML document dynamically, which gives the developer greater freedom.

In general, Ember minimizes the DOM and allows working with large ecosystems. Developers can use observers for value change. It means that they only have to render the values. Ember starts quickly and is very stable. If developers master this framework, they can be very productive in creating sophisticated and high-quality applications.

Angular is a JavaScript framework based on TypeScript, developed by Google and released in 2010.

The framework adopted the practice popularized by React – one-way data flow and immutable data. So Angular only updates data changes once. And every change detection does a quick check of the object’s reference instead of checking all of its values.

Another positive aspect of Angular is the ability to render on the server. It speeds up the initial page load and improves the app’s performance and SEO in general. In the end, if we compare the performance of Angular to that of Vue.js, we see no big difference. Both frameworks are fast and have very similar metrics.

Angular offers a clearly defined framework that allows developers to work in a unique style and flow. So, if you are a TypeScript fan, this tool is a great choice.

Several assistive technologies are built into a site that makes it easier for people with disabilities to use and interact with web applications, increasing the number of potential users. No matter how fast your e-commerce ideas get, you risk losing market share if your app isn’t accessible to all types of users.

The solution? Design a site to be accessible while increasing the user experience.

On the other hand, Ember made it very easy for the coders to focus on the accessibility factor of the web application by providing project-appropriate attributes and layouts. It’s really hard to add attributes in the middle of coding; Ember allows developers to add the attributes early in the project or edit the index file later.

We can say that when it comes to weighing the utilities, the accessibility factor of a web application should be the priority of the developers.

To address these aspects, Ember performs three types of testing:

It gives you the power to write tests and be productive from day one. Developers working to build applications need to understand the importance of writing tests to optimize the iterations over time.

Ember has instilled test writing best practices and included testing basics from the start of a project.

Ember is ahead of other frameworks in several respects:

Angular is written with testability in mind. However, developers must learn how to get the most out of this framework. That said, they should be aware of everything it offers.

It also offers the “one file, one module” principle to manage the order of modules during tests. Users need more ease, accessibility and smart operability in their applications. It makes it easier for you to write modular logical units and clear documentation. A combination of unit testing and Angular helps find flaws easily and at an early stage.

The Angular community understands the scope of applications well, and it grows over time. Although Angular is very close to unit testing, it is not difficult for developers to improve code orthogonality. And that’s why Angular apps are less likely to resist change and welcome updates quickly.

Because of this, Angular provides the foundation for handling the growing size and complexity of the application and has entered the list of practical approaches to testing.

Angular has also built test runners like Protractor to perform end-to-end testing and boost user interfaces. These rich and engaging interactions make applications robust and easy to use.

Components are the building blocks on which an application develops and operates. While components benefit from a widget-based approach in Ember, Angular has a more expansive approach.

With Ember, writing HTML tags is easier than ever due to the Handlebar layout, which effectively helps write application-centric HTML tags.

The Ember JS framework is flexible when using custom elements to develop a business-oriented web application.

Ember gives you the flexibility to break HTML into smaller parts: components.

Ember has gone a step further in its offerings compared to other development frameworks. Indeed, a great choice for developers, the framework has made it easier to perform some common tasks. The flexibility of components in Ember helps bind properties dynamically.

As mentioned above, Angular components have a more expansive approach than Ember’s; creating reusable HTML syntax is easy. The framework makes it possible to use the semantics of the code in a more optimized way, resulting in the most accurate and elegant structure of the codes of the application.

Angular is an extended framework that also provides multiple UI frameworks in the ecosystem, allowing developers to be more innovative and insightful in their projects.

What are the advantages of Ember vs Angular?

One can certainly put both frameworks on a pedestal and judge them by their benefits. Both being the best SPA development frameworks, app developers should consider the context when choosing the right framework.

What are the benefits of Angular?

What are the benefits of Ember?

UI designers and developers must know about the potential of frameworks to facilitate and speed up the entire web application development process.

Ember is an open-source Javascript-based library that helps develop smart and efficient single-page applications. It is a very flexible and easy-to-use framework for scripting client-side web applications and is also a great deal when it comes to writing native applications in code. Relying entirely on the view-to-view pattern, it uses routes, templates, patterns, controllers, and components.

Angular is the application developer’s greatest asset in building large, business-oriented applications. The framework does not contain any bars or dependencies ( Jquery or other types of Javascript). With its streamlined routing, the framework makes page navigation easier and faster.

Due to its lightweight directive and high-performance nature, Angular JS is the best framework for building single-page applications.

If that’s not enough, the framework makes it easy to perform automated application tests.

The main difference the developers have found in the two frameworks is that while Angular seems like an easy language, Ember gets easier as you progress through your learning phase.

If the app developer or programmer is familiar with either of these frameworks, working with them becomes amazing and efficient.

Also, Angular is more flexible than Ember, which is resource-dependent and limited by additional resources. Angular is an extended framework, so before you decide to go with Angular, ensure you have the best professional web application, developers.

On the other hand, Ember allows web application developers to learn through the strict model using more conventional methods. The framework can be a bit overwhelming for beginners.

Which framework to choose? No one can put either of the two frameworks on a pedestal, as each has its pros and cons. While Ember is more complex and has a comparatively steeper learning curve, it also has out-of-the-box functionality in specifying web components.

Regarding complexity and scalability, Angular clearly has the edge, as developers can build large and scalable applications without worrying about complexity.

For a developer, the learning curve is probably not crucial when deciding. The priority is the other set of utilities and the effectiveness a framework demonstrates in the context of the nature of the application and the business it serves.